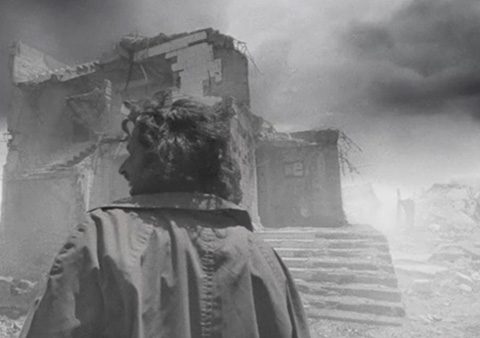 In “Interval”, we follow a nameless man in a world left in ruins after a major earthquake. As we watch the film, “Interval” invites its audience to contemplate on the relationship between memory-time-space, photography-video and the concepts of mobility and immobility. It is in this particular context, “Interval” commemorates Chris Marker’s pioneering masterpiece, La Jetée (1962).

It was extremely important for “Interval” to have an influential and lasting cinematographic audio-visual impact on the viewer. For this reason, the post-production lasted almost a year.
Alper Sarıkaya acted as the Digital Art Director and Visual Effects Supervisor who spent more than several hundred hours to paint, detail and construct every shot, frame by frame while Murat Gülbay who was in charge of Sound Editing and Sound Mix, created a detailed and sophisticated sound design.

“Interval” is written and directed by Hüseyin Mert Erverdi who also acted as the DOP and the editor of the film. “Interval” has two actors: Tan Arcan, who played the nameless man and Nuray Işıklı who played the little girl.